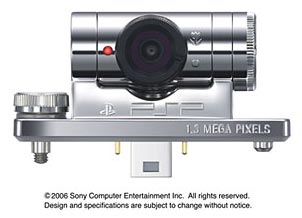 Remember back in 2004 when photos were snapped at CES of the PSP camera accessory? The blogosphere and gamers alike were all alight with anticipation – at the time the idea of having a camera on your PSP was more exciting than words could say. Why Sony hasn’t released the PSP camera here in the states is beyond me, but thank heavens for Play-Asia. The PSP Camera is “region-free” and can be used on any PSP.
Play-Asia