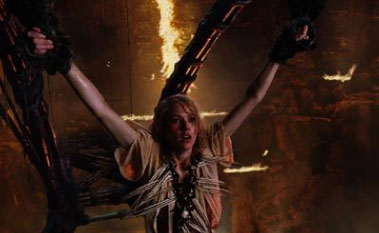 People generally fall into three camps: those who like King Kong, those who think Godzilla is better, and those who think the first two groups need to “stop obsessing over kaiju and get a life already, loser!” Personally, I fall into the Godzilla camp but have been a huge fan of Kong since I was a kid. Peter Jackson obviously falls into the Kong camp – he shows Kong more hot wild monkey love in this film than any filmmaker before him, and probably any who will come after.

Filmmaker Carl Denham (Jack Black) is looking for his big break, and against the wishes of his backers gathers his cast and crew to sail to a mysterious place only known as “Skull Island.” Once there Carl along with the ship’s crew and cast and others unfortunate enough to go ashore encounter the mighty King Kong. Leading lady Ann Darrow (Naomi Watts) is captured and sacrificed to the big guy, and….wait, you have seen King Kong before right? You know what happens…mostly. This film is truly a re-imagining of the original however, and is full of things you haven’t seen before.

It’s almost impossible to believe that any woman could form an emotional bond with a 25-foot tall gorilla who has ripped all his previous “girlfriends” limb from limb. Yet Jackson masterfully creates the emotional bond between human and simian, and is able to make you feel it too. When Ann whispers “Go back, go back” to Kong as he follows her the emotion in her voice tells you she knows what will happen if he is captured and brought back to the civilized world. Like most men, rather than listen to his female counterpart Kong plunders forward and is of course captured. Jackson fills this film with emotional bonds and ties between characters, and while some work better than others the bond between Ann and Kong is larger than life. Second best thing in this film? The action and special effects. When Kong tears ass though the jungle you can almost feel it yourself, and the fight scenes between Kong and the other denizens of Skull Island are truly original and breathtaking.

The Single BIGGEST THING Wrong with this Movie (Minor Spoilers)

They say that “everything is bigger in Texas” and those people have obviously never been to Skull Island. The sailors of the “Venture” warn their passengers about this mysterious place, and that “none who went there came back alive.” “Yawn…” you think to yourself, “I’ve heard all this before, bad place, don’t go there but you’re going to go there anyway, whatever.” Nothing you’ve seen before could prepare you for what the characters encounter on Skull Island. Peter Jackson does a great job of making the audience truly believe how bad a place this is with the “Bug Scene.” To get and idea how bad this scene is, you’d have to know a little about Mr. Jackson and his fondness for gore. His first film “Bad Taste” is about aliens who come to Earth to use humans as fast food, and it as gory a film as they get. Mr. Jackson later made “Meet the Feebles” which is a film about muppet-like puppets who fornicate, do drugs, and in one scene get shot up with machine guns (these puppets have blood and organs, which spray everywhere when shot.) Last on the Jackson “School of Gore” list is “Dead/Alive” which was rated NC-17 for…you guessed it, gore. In all the aforementioned films you expected what was coming, being prepared for it made it not quite so bad. Getting back to the bug scene in Kong… *START MINOR SPOILERS* If seeing people literally be eaten alive by big pink fleshy lamprey creatures isn’t your thing, you may want to close your eyes during this scene. No one in the theater I was in was expecting this scene either, and even this gore-fiend felt his stomach do a flip when one of the sailors was consumed by these awful creatures. *END MINOR SPOILERS* One couple actually left the theater shortly thereafter. It was too much taken too far, even for this aficionado of disgusting cinema.

Well, YA! Just don’t try to sell your girlfriend/wife/significant other on it being a “love story.” The emotional elements are there, but this is a man’s action film through and through.

Listen to the sailors, stay the CAPITAL F!! on the freakin’ ship and not set a single foot on Skull Island!
Some may find “King Kong” to be too long – running time is three hours and seven minutes. I love long films, and did not find the film to drag or stall in any way. Look at it this way – you’d probably end up buying or renting the director’s cut DVD to see all the deleted scenes anyway, in this case you won’t have to! “King Kong” is sure to be a runaway success, and Mr. Jackson will be able to direct just about any film he wants to make. I’d love to see him direct a big-budget horror film next – the scary scenes in Kong are sure to give many unsuspecting children and adults nightmares for some time to come. I am a huge fan of his early movies – just imagine the horror gorefest of a film he could make now!