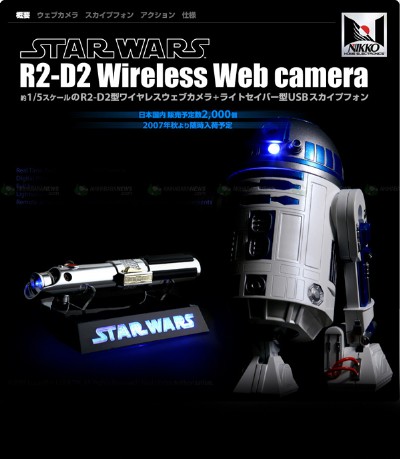 R2-D2 was many things to many sentient beings – repair droid, comedic foil, savior. What most don’t realize is that above all things, R2 was a no-good little spy who secretly recorded audio and video of anything and everything. He’d often sell out to the highest bidder, or sometimes accidentally to a young Jedi who snapped a restraining bolt free. This new wireless webcam version of R2-D2 from Hammacher films in 628 x 528 resolution and transmits real-time video and audio, and can be controlled via lightsaber remote or remote access via the Internet. Movements include 360 degree spins, forward, left, right, and reverse and he also sports edge detection to prevent spills off a table or down the stairs. He runs on six AA batteries, but be careful what you say or do around him – he’s watching you!
The Erector Spykee also acts as a wireless webcam, but will find his way back to his power station when low on power.
Hammacher

If you enjoyed this post, please consider leaving a comment or subscribing to the RSS feed to have future articles delivered to your feed reader.
Tweet
Share on Tumblr
POSTED IN » Gadgets From Japan, Robotics, Spy Gadgets