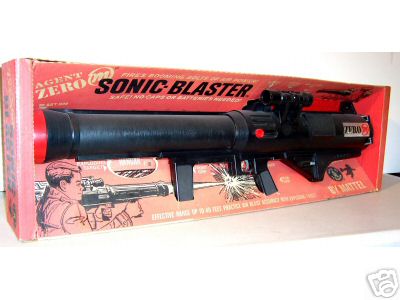 Sadly I wasn’t old enough to own one a Mattel Agent Zero M Sonic Blaster in 1966 but if I had I can assure you that the side would be marked in chalk “I’s” for each eardrum I had blown out (other kids, not mine silly!) This sonic bazooka was pulled off the market after parents realized children could blow out other children’s eardrums from “dozens” of feet away.
As soon as we can get one of these from ThinkGeek, you’ll get a full review, I promise.
Mattel Agent Zero M Sonic Blaster 5530 on eBay