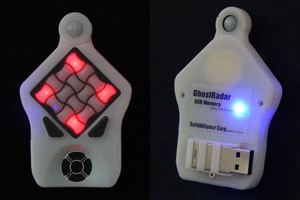 From SolidAlliance, the company that brought you the USB Duck and USB Sushi, comes the GhostRadar ghost detector. The portable GhostRadar detector beeps and flashes red lights when it detects unusual magnetic waves. Body heat and sweat can also be detected.
GhostRadar Press Release
GhostRadar Product Page
(and it’s not an April Fool’s joke – as far as we can tell, anyway.)