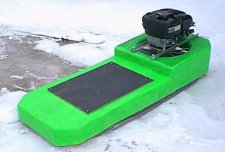 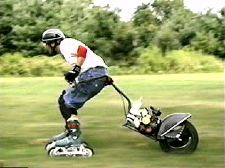 We reported almost a year about plans to build your own hoverboard. That was then – now, Future Horizons, Inc. will gladly send you the plans for $39 (via email) or build one for you for $9000!
Combining this Hoverboard with a Roller Cycle (shown to the left) would make a hell of a review segment. Again, we cry out to MTV’s Jackass – we want to see someone try these two new personal transportation technologies out together!
Future Horizons Hoverboard