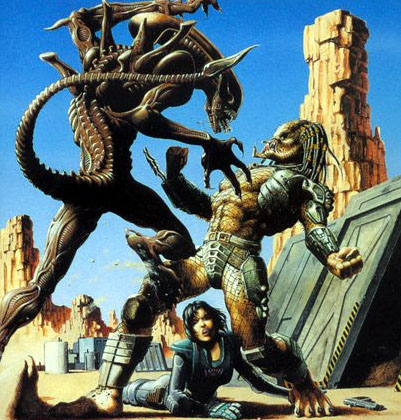 I know you have to be wondering the same things about this movie that I was: are the Predators in this movie going to have the Insta-Kill Spear Guns like the Predators in Alien vs. Predator the PC game, or will they be nerfed like the Predators in AVP2? Will they ooze stealthiness and kill silently like the one lone hunter in the first Predator movie? Will they have the masochistic gadgets like the SuperSHARP Pain-NetBlaster and Glaive weapons introduced in Predator 2? What about the Aliens? Will they have the smooth sleek glistening domes like the original A L I E N, or have the changed ridged domes like the ones in Aliens? And will there be any reference to the original script for the AVP movie or anything included from the AVP books like Alien vs Predator: Prey? Most importantly – will you start your saved game (if playing as the Alien) from the last human you “egg’ed” like in the Atari Jaguar game?
Let’s go back in time to 1979 when I was 10 years old and I begged, pleaded, drugged and dragged my horrified parents to see A L I E N at the very last theater showing it in our area before it left the big screen. (OK so I didn’t really drug them but I do remember them drinking alot after we got home from the theater.) Since that early age I’ve been hooked – I’ve absorbed every piece of information about Aliens and Predators that I was able to get my hands on, from watching all 12 hours of special materials on the Aliens laserdisc back in the day to finally making it through all 90 (plus) hours of the Alien Quadrilogy including the “making of’s” and alternate versions. I’ve also played all the games (Alien on Commodore64, anyone?), read the comics, and read the books. ALL the books.
All that said, like you I eagerly watched the ratings on Rotten Tomatoes for the new Alien vs. Predator movie and was letting my hopes start to get crushed as critic after critic wrote scathing and hateful reviews about AVP. Then I went and saw the damn thing anyway. I’m not going to answer the questions posed above so as not to spoil the movie for you, however…

KNOW THIS – IF YOU ARE ANYTHING LIKE ME, THIS MOVIE WILL KICK YOUR ASS TO ACHERON LV-426 AND BACK, AND YOU WILL BE GRINNING YOUR BALD-HEADED RIPLEY C’MERE JONESY! ASS OFF THE ENTIRE TRIP, PERIOD.

The Predator race is the most technologically advanced species of hunters in the whole entire ‘verse. Aliens are the perfect organism. Killing machines with acid for blood and armored skin, the Alien is the battery in the vehicle of your worst nightmare and wants to use humans as a host for the birthing of their offspring. Predators are the ultimate hunters, and the Alien is the ultimate prey. When the males of a Predator clan become men(things), they must go through a rite of passage and kill the ultimate prey to earn their marks in the clan. So how do humans fit into this story? The Predators have special training grounds, or pyramids that they use on various planets (including this one) for their young men to become fully fledged hunters. There’s one of these pyramids under the ice in Antarctica, and the underground activity has attracted the attention of a Weyland Industries satellite. Charles “Bishop” Weyland wants to make his mark on history, so he assembles a team of experts to check it out.

It’s like what, -40 degrees below zero in Antarctica? People just can’t stay outside that long or they die from exposure. It’s a movie so I could turn off my disbelief but I just wish someone has said something like “DAMN MY BALLS ARE GONNA FREEZE OFF LET’S GET IN THE PYRAMID NOW” or something like that.

EVERY detail in this film was perfectly nailed, dead-on. Remember in Alien: Resurrection when Gedimen says “We used blood samples from Fiori 16, on ice.” *GROAN* Any idiot paying attention during Alien3 would have noticed that the name of the freakin’ planet was Fiorina “Fury” 161. I HATE THAT CRAP WHEN PEOPLE CHANGE RULES ESTABLISHED IN PREVIOUS FILMS, OR WORSE, GET THE SIMPLE DETAILS LIKE NAMES WRONG. In AVP all the (good) details from the previous films are preserved, and some new elements are introduced from the AVP books and games. The Predators? Bad asses. The Aliens? Perfect. The effects? Snap. The story? A little episodic, the plot in AVP feels like a single chapter in an otherwise bigger book (hint hint oh please let it be so. If you’ve read the three AVP books, the best two, Prey and War, written by SD Perry) you’ll know what I hope is being hinted at – trilogy! The story in the movie version of AVP is very similiar to the story in AVP:Prey.) It’s apparent that Paul W.S. Anderson, the director and screenwriter of AVP has also read the books and played the games extensively. Given that Fox holds two of the coolest sci-fi properties there are, and can’t seem to do anything right with them in recent decades I’m not going to count off for story in AVP – it’s an action film. (For all those griping that AVP isn’t scary, and that it has a PG-13 rating: AVP the books, the comics, and the games are primarily about action and not horror. So is the movie – get over it.) Paul Anderson does best with bringing the stories created by others to the big screen, while at the same time paying close attention to detail and respecting the integrity of the storyline of whatever the series is. He accomplishes this in spades in AVP.

Ask yourself this question – do you want to see another Alien or Predator film and not have to wait seven years for it? That’s right – it’s been seven years since the awful Alien Resurrection stank up the theaters, and the reason why is that Hollywood is a business and Alien: Resurrection totally tanked at the box office (and for good reason). For the non-fan, Alien vs. Predator is a good action film with great special effects. If you are a hardcore Aliens/Predator fan, it is going to be an absolute dream for you to watch. The critics are beating the slimy snot out of AVP right now, it’s like AVP vs The Critics, and the idiot critics are winning. (I remember what the critics said about Alien and Blade Runner when they were released, and each film was trashed and ragged, but are now considered classic sci-fi films.) Want to see the rumored James Cameron/Ridley Scott collaboration for Alien V get made? Go spend the cash to see AVP. It’s not as good as the Alien, Aliens or Predator films, but blows all the subsequent sequel films away. (Anyone who is in question about the end of AVP the movie needs to play AVP2 on the PC to understand the homage being paid.)

Dammit no, and I really wanted to see Peter Weller as John Yutani (from the Weyland Yutani Corporation) make his rumored appearance at the end of the film, talking about what the coporation would do next to acquire an alien. Sadly, I was left in an empty theater with no stuff after the credits and theater monkeys staring at me (“LEAVE! LEAVE! WHY ARE YOU HERE AFTER THE CREDITS” thought the monkeys) so they could clean up the mess in the aisles. So I whipped out my Pain-NetBlaster right there and watched em wriggle like stuck bugs against the wall!

Listen when someone tells me not to pick something up. Oh, and never ever ever ever scold a Predator – they hate that. Alot.
There are a few cool little homages tucked away in AVP: watch the screen in the satellite station for another “versus movie.” Also, the actor who plays the squad leader in the Resident Evil film dies in nearly the same way in AVP as he did in RE (think little sliced cubes.) AVP is worth your money and deserves a better shake than what the critics are giving it. If you are a freakfan like me who has read the books, you will be in heaven when you see Lex become a “hunter.”
I should also mention (since I am a gadget whore) that everyone in the theater thought my green laser pointer

just like the ones they had mounted on the weapons in the movie, was way, way cool.
Comments and feedback, as always, is welcome.