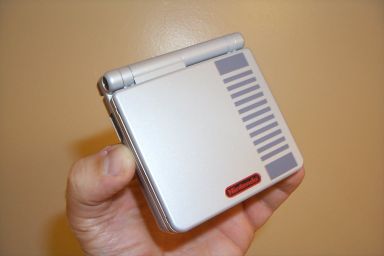 Many of you are probably wondering (like I was) what the new, limited edition NES Game Boy looks like out of the box. What does the top look like? Is the bottom a different color? Is the power cord done up all retro style too? I considered skipping this special edition SP and putting my money towards a Nintendo DS, but then gadget madness took over and I traded in my old GBA and some overplayed games to get this little wonder. 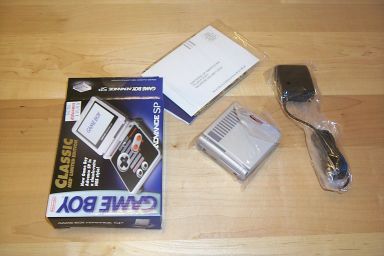 Standard stuff here, the GBA SP, AC adaptor, the manual, and some Nintendo inserts and warnings about flashing lights and epilepsy. (Videogames are bad, mmmmkay?) 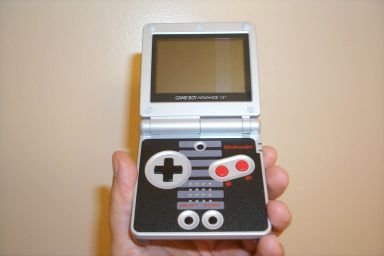 Just have a look at these views from the front, side, and rear. This handheld delight just screams retro cool styling with an updated SP smile. (Shift-click on the images for full size images in a new window) 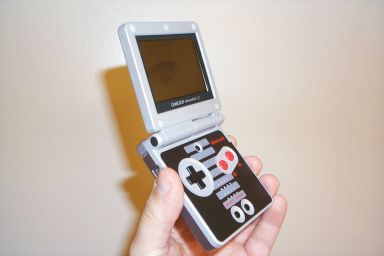 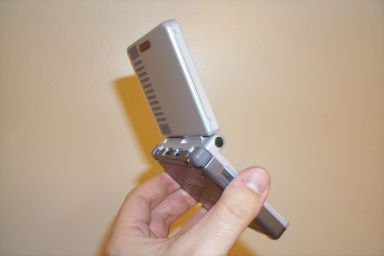 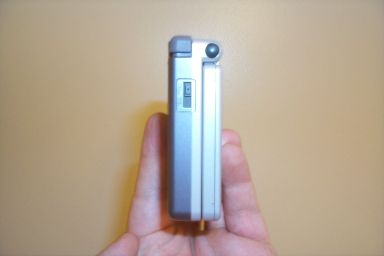 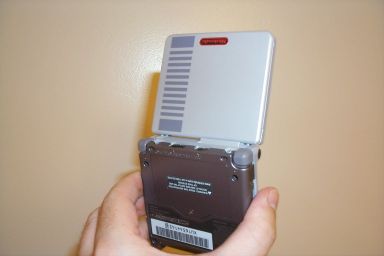 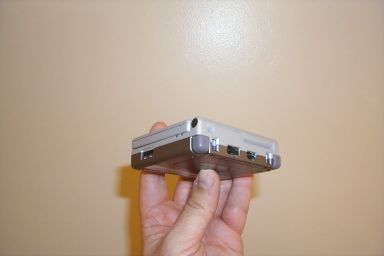 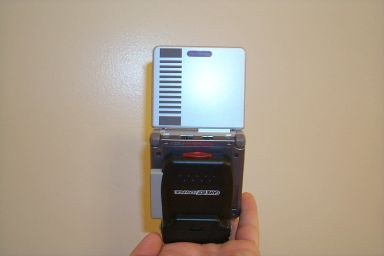 With the original GBA SP 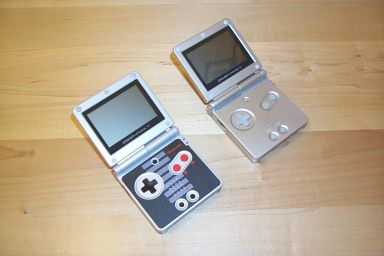 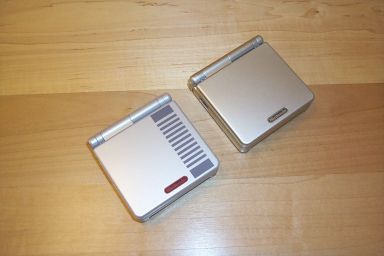 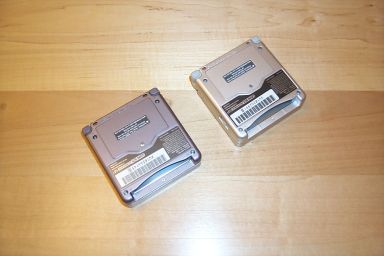 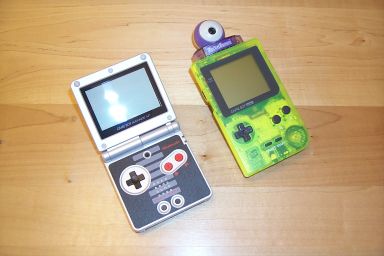 There’s an intangible tastiness that comes with owning this special edition GBA. Yes, it turns on and off just like a regular SP, it has all the same buttons and controls, although the surface on the front has a nice “grippy” texture which is different. It’s an SP that plays games just like an SP, but it gives one that “I’m four years old and just got the greatest birthday present ever and you don’t have one” kind of feeling.

Only two gripes, and they are minor. Nintendo, if I’m going to shell out $100 for another Game Boy, then I expect the WHOLE THING to be special edition. I don’t expect the power cord to be the same blah blah black sheep generic AC adaptor that comes with a regular SP. The AC adaptor should be done up like a mini NES, and it isn’t. (That’s why Big N should hire me, I think about these things.) Secondly, as some have speculated the NES surface on the front of the unit is a very tough, high quality sticker. I’ve tried poking at the sides with my fingernail, and it’s on there supertight and isn’t likely to come off at all, ever. Just the same though, it’s a decal, and some people may be bothered by that. I’m not, I baby my handhelds; if this one isn’t in my hand, it’s in a protective case.
Am I recommending you go shell out another $100 for this GBA? Not sure, that’s up to you. I think that if I’d actually paid cash for mine instead of doing trade in, I’d be 25% less happy. If you already have an SP or just a plain GBA I would highly recommend you take your old gear to your local gamestore today and trade up to this special edition GBA. If you’ve never owned an SP before, this is your call to go buy one this moment. Sure, you could wait for the Nintendo DS, but all hell could break loose tomorrow, and New York could freeze over while the oceans wipe out major cities and vampires feast on the blood of humanity while zombies wander the streets delivering newspapers with the headline: “THE END IS HERE, AND YOU DIDN’T GET A SPECIAL EDITION GBA NES SP!”
THE END (of this review) IS HERE.