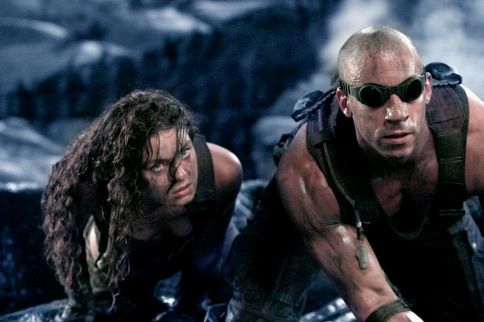 “The Chronicles of Riddick” is the sequel to the 1999 sleeper “Pitch Black,” which was a smart and suspenseful sci-fi/horror film set on a single planet with three suns that eclipse once every 21 years. “Pitch Black” focused strongly on deep, interesting characters and an intelligent plot, and the moral of the film was that anyone, no matter how horrible a person they may be, can find the potential for change for the better within themselves.
“The Chronicles of Riddick” is neither smart nor suspenseful, lacks both deep, interesting characters and an intelligent plot, and teaches us that answering every question with a question followed by a clichÃ© wannabe badass remark is a very asinine and annoying habit. Oh, and that in the future, spending five years in the “slam” will turn an awkward teenager from the first film into a very attractive young woman. Right.

Set five years after “Pitch Black” (which was set 500 some odd years in the future) we find Riddick still on the lam, but now with an even bigger payday on his head and the responsibility of belonging to a lost race known as the Furians, the only race badass enough to stand up to the Necromongers. The Necromongers are led by The Lord Marshal, a man who is “half alive and half something else” and are (half) dead set on converting the entire Universe into a group of pansy gothic-wannabe politicos with navels on both sides of their necks on their way to a place called “The Underverse.” (You think I’m making this up? I wish.)

I watched “Pitch Black” (unrated version) before going to see “The Chronicles of Riddick.” How is that the biggest thing wrong with this movie? Because it was fresh in my mind how damn cool the first movie was. Cool characters, attention to small details, everything about “Pitch Black” was right on the money. I liked how the survivors in “Pitch Black” commented on how it is hard to breathe on the planet they crash landed on, and have to use little oxygen tanks. In “The Chronicles of Riddick,” all attention to detail and common sense flies right out the window. The idea of the Necromongers as a race of universe destroyers is facinating, sadly they are so poorly portrayed they’re laughable. Ok, here goes kids: we’ve planted a huge freaking monument in your planet, and overrun your planetary defenses, but now our supreme leader The Lord Marshal is actually going to hold a “town meeting” with a small group of survivors to give you the choice if you want to convert or not. And once you actually convert, you’ll have doubts and won’t be 100% convinced that “the Necromonkey way” is the right thing to do, but we’re going to convert your ass anyway, if for the only reason that those silly colorful robes you are wearing are soo 2375, the in thing in 2590 is black neo-Earth Roman armor, kay? And that’s part of why I was so sadly disappointed in this film. Small details about people and places had meaning in “Pitch Black.” In the “Chronicles of Riddick,” a whole race called elementals are invented for the sole reason as to serve for special effects. In another scene, Riddick is taken underground and upon stopping mutters “29.4 kilometers” in a snide “I know how deep we are underground, nyah nyah” kind of way. Does this data actually mean anything, or help anyone later on? Nope. It’s just said so we’ll think you’re cool. Come to think of it, alot of things Riddick says in this film seem like he’s saying them just to make you think he’s cool.

The first 10 minutes of the film show great promise, and watching the invading Necromonger armada is very entertaining (until they start to speak and you learn how stupid they are.)

If you really enjoyed “Pitch Black,” then I wouldn’t recommend you pay full price for “The Chronicles of Riddick.” You’re probably going to want to see it anyway from the hype around the sequel, but please pay matinee price or wait for DVD release. If you never saw “Pitch Black” don’t waste your time in the theater, go rent “Pitch Black” instead.

Um, yeah, right after the first round of credits and before the real credits begin. What you see is the final nail on the silly ass coffin that this movie falls into after it died for me.

Laugh at the bad guys mockingly and think how silly they are. Oh wait, I did that in the theater, nevermind.
Someone might say I had my expectations too high for “The Chronicles of Riddick,” that I should enjoy the movie for what it is, blah blah blah, or how could you like “Van Helsing” and not this film? I say I enjoyed “Van Helsing” because my expectations were set by the trailers going in: badass monster hunter kicks monster’s asses in a string of high action effects sequences, minimal character development, and that’s what I got. “Pitch Black” set my expectations for “The Chronicles of Riddick” by being a very smart and sexy sci-fi thriller with real chracters who had real problems. If you can ignore that the first movie exists, then “The Chronicles of Riddick” serves at best as a substandard big-budget mediocre science fiction space opera, a “xXx” of sci-fi films with big stylish fight scenes, big special effects, and really not much else going for it.
Comments and feedback, as always, is welcome.