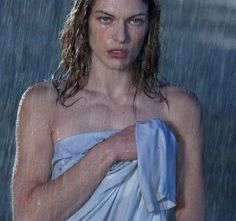 I loved the first Resident Evil film. It captured the “feel” of the Resident Evil universe from the games and added new elements, new characters, a grinding soundtrack and some really great “heroine kicks zombie (and zombie dog) ass” moments. I’ve finished all the Resident Evil games (including Resident Evil: Survivior) and know the story very well. I walked into RE2 with no expectations; most sequels suck and I did not want to set myself up to be disappointed. The only good reason to go see Resident Evil: Apocalypse? If you are desperate to see Milla Jovovich in a towel and can get in for free.

The Umbrella Corporation, apparently clueless of what went on in the underground complex called the Hive during the first film, unceremoniously re-opens the Hive with only 5 or 6 unarmed guys in chemical suits thus releasing the T-Virus on the rest of Raccoon City. Zombies, explosions, mayhem, and repetitive action sequences ensue.

Everything. For starters, the story elements are dried up and lame. The Umbrella Corporation could actually erect a large steel wall around Raccoon City overnight without anyone knowing about it? Jill Valentine, who is no longer actually on the R.P.D. can walk into the Police Department and start blowing zombies that everyone else just thinks are “people gone wild” away? I dare you to count the shriveled up excuses for action sequences where a main character is just about to get chomped by a zombie or monster, where unexpectedly another character who was not even there in the first place pulls off ridicuous marksmanship and blows the baddie away. I’m not kidding – this type of “zombie’s almost gotcha, but unexpected person appears from nowhere to save your ass” happens at least six times. I could go on with describing the story elements that have been used a dozen times before and better in other movies in this lifeless piece of crap, but then I would be wasting your time as well. Let’s just say that the Nemesis character is a RoboCopNemesis ripoff with an HUD point of view and counters to show his health stats and number or S.T.A.R.S. members killed. Seriously. Every good idea that comes from the Resident Evil games in this movie is doused with ten gallons of lameness and set on fire.

That would be the scene where a supporting character exclaims “GTA, Mother*&^#$%!” after he runs down zombies in his vehicle, only to crash his car and then be chased by zombie hookers. Nice one. Too bad the director couldn’t be as clever with the rest of the film.

No. Don’t bother with this one. It’s a terrible excuse for a Resident Evil film and an awful standalone action movie as well.

Yeah, a useless closing message from the Umbrella Corporation before the main credits start.

Hang out where the final showdown between Milla (Alice) and the RoboCopNemesis occurs. Apparently, even though zombies are hot on the trail of live flesh within minutes everywhere else in the film, during this scene they wait at least a half an hour before showing up so as not to crowd the camera. Besides, we all know that the bad guy will side with the good guys at the end anyway and even when the supporting main characters disguise themselves poorly to rescue the heroine they will pull it off with an unexpected twist that has absolutely nothing to do with Resident Evil. If I had one option of Umbrella stock for every overused action sequence, story cliche, and dumbass story twist in this movie I could perform a hostile takeover and fire all of the Umbrella execs in this movie who come from the “Die Hard Villain School of Acting.” And you probably think I am joking – I’m not.
I will also mention (since I am a gadget whore) that the Nemesis had a green laser pointer

mounted on his mini-gun. Sadly, this 3% of coolness did nothing to overcome the other silly-ass things about the special effects used to create him.
There won’t be a sequel to this one, and that makes me sad. I’ll just have to go dig up my Wesker’s Report DVD and watch it again. Bad voice dubbing and all, Wesker’s Report blows Resident Evil: Apocalypse the movie away.
Not a Resident Evil fan in the first place? Check out the positive review at ModernJackass. We suspect the good folks over there have been paid off by Umbrella, however… 🙂
Comments and feedback, as always, is welcome.