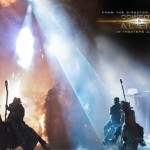 A mysterious and dangerous stranger with no memory and a wicked alien-tech arm blaster rolls into the mining town of Absolution – alien mayhem shortly follows.

Visualize the cool western personalities from “Young Guns” or even “The Good, The Bad, & The Ugly” and then go re-watch those movies instead. “Cowboys and Aliens” suffers greatly from a distinctive lack of personality in both its human and CG aliens – no bad-ass sharp shooters or fast draw gunslingers here. This movie also takes itself far too seriously; by the very title one expects B-movie sci-fi action greatness and not heartfelt soliloquy’s as wounded characters die. Brief moments where secondary characters freak out in a way that could be humorous fall flat where main characters remind them this is a serious film, and to stop acting so silly.

Jake Lonergan’s arm blaster. Seriously, even though the aliens had no idea how to use them effectively, we want one.

Should You See It?

This reviewer spent the last ten years watching this movie go through script changes and new directors hoping for a cool film where the Old West had to use ingenuity and teamwork to defeat a superior alien army. As much as we love some of Jon Favreau’s other films we just can’t recommend anyone else sit through this one.

You’d expect there to be something after the credits, right? How the future would be changed by the introduction of alien tech to the Old West, or cowboys and Indians living together in peace having united against a common extraterrestrial enemy? Sadly, after the main character “rides off into the sunset” that’s the end.

“Cowboys and Aliens” is to cowboys and alien as “Reign of Fire” is to dragons and tanks. You wanted to see massive dragon versus post-apocalyptic hardware battles in “Reign of Fire” didn’t you? I did, and sadly that movie disappointed in much the same way “Cowboys and Aliens” does. Yes, “Cowboys and Aliens” has spaceships, aliens, a beautiful girl (with no nudity) as well as a mysterious stranger with a missing memory but by the time Jake Longergan pieces together his lost past this reviewer no longer cared. I didn’t hate this movie but was disappointed in the missed potential and overall dullness and predictability of the characters and story. (For the direct to DVD sequel may we suggest something with a sense of humor and over-the-top action like “Clowns and Dinosaurs?”) Even though “Cowboys and Aliens” the movie disappoints, at least the limited edition Hipstamatic Matty ALN and Libatique 73 lens packs are cool.

Something For Your Garden

What’s in Your Kitchen?

Power-up in time for Summer gaming