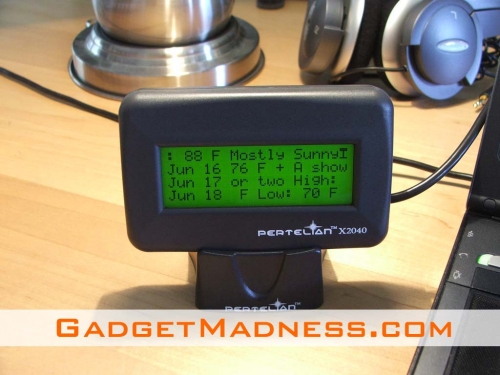 I’m going to cut right to the chase with this review. The Pertelian X2040 LCD screen is going to appeal to four types of people: hardcore gamers, sys admins, information junkies, and tweaq freaks. Since I happen to fall into all four of those categories, you can tell I’m kinda keen on the Pertelian. However, that’s not to say it’s a perfect product – just like your last ex-girlfriend, the Pertelian’s got a few annoying habits.
Pertelian LCD Display – On Sale @ ThinkGeek.com 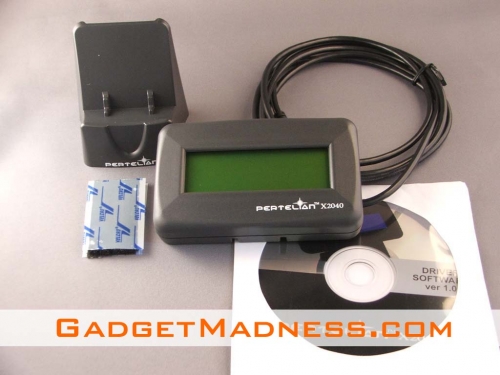 Included with the Pertelian X2040 is a display stand, Windows driver & software CD, and a strip of sticky Velcro tape, hey hey. 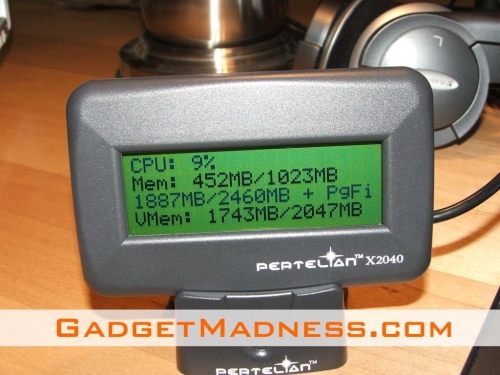 System Info, Updates Every Few Seconds
Well for starters you can use the Pertelian to display IM notifications and POP3 email right on the screen, which comes in really handy if you are in full-screen Oblivion or WoW. That’s not all the information you can display though – using “Plugins” you can also display and control MP3 and media apps like iTunes, Windows Media Player, and WinAmp. Here’s the full list of of Pertelian Plugins and a brief description of each:

The install process is fairly simple IF you are used to installing devices yourself in Windows. Knowing the homebrew aspect of the Pertelian, I tossed aside the included CD and surfed out to Pertelian.com to download the latest drivers and software. The Pertelian plugs into your PC via USB port (serial emulation) and I specified the downloaded driver files. One snag I ran into was tracking down the actual COM port being used since the software guessed it wrong, but it was a simple matter of finding it in Device Manager. (Had I checked the CD first I would have found a lengthy and detailed Word doc that details the exact same installation process I went through on my own.) The screen on the Pertlian is bright and crisp – so bright and crisp in fact I was inspired to do a video review: 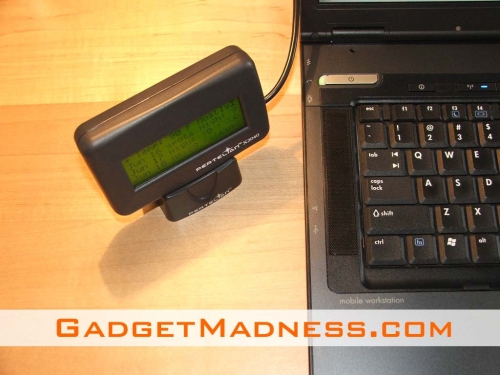 The Pertelian As Viewed Sitting Down At Your Keyboard
As I mentioned earlier, the Pertelian has a few annoying habits. The installation process alone tells you that this isn’t quite a package deal, but more of a homebrew kit. It would be nice if the included CD had an autorun process to guide you through the driver & software installation steps. The USB cable is permanently attached to the display, and that drives me a bit batty. I would have much rather preferred a USB connector on the side of the display so I could use my own shorter USB cable, a lighted USB cable, etc. The display angle when docked in the stand is all wrong, the dock should either be angled more for normal viewing or better yet allow for some swivel so you could adjust the viewing angle yourself. The Pertelian software is also a little buggy. The app crashed a few times when I was configuring my plugins, and when it came back up all my config settings were lost and I had to start over. (Once my plugins were configured however the Pertelian app ran fine and didn’t crash.) There are no proxy settings in the Pertelian app, meaning it uses your Internet Explorer proxy settings. While I am at home this works fine, however on a corporate network I ran into issues. It would be nice if the Pertelian app had a seperate proxy configuration screen so you could have it connect to the Net via different means. Lastly, the systray icon has to be one of the ugliest I’ve ever seen.

GadgetMadness Verdict:
The Pertelian X2040 LCD Is The Old “Ex” You’re Still In Love With

If you are of the homebrew mindset, you’re going to love the Pertelian. While it is in no way ready for a mainstream audience due to difficulty of installation and use, it is hardcore fun for the “hardcore gamer sysadmin information junkie tweaq freak” in you.
Pertelian Resources:
Pertelian Driver, Software, and Manuals
Pertelian Support Forums
UNOFFICIAL Guide to Writing Your Own Pertelian Plugins
More Photos: Pertelian X2040 External LCD Display