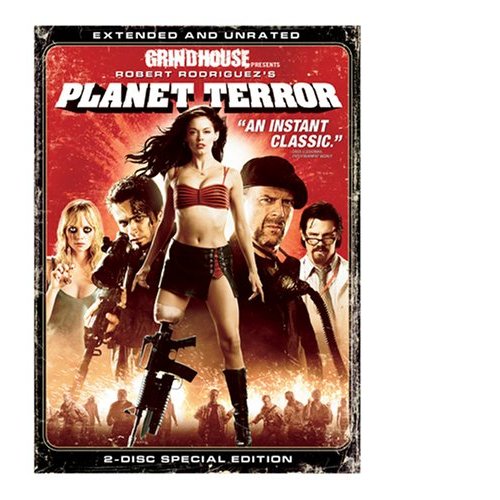 Like you, I wanted to see “The Grindhouse” when it was released in the theaters, but I couldn’t find a four hour block free to sit in the theater. While “Death Proof” looked good I was more interested in seeing “Planet Terror.” I actually managed to avoid all trailers for “Planet Terror” and watched it fresh knowing nothing about the film except that it was about zombies and a babe with a machine gun leg. If you’re read the site for a long time you know I have a thing for zombie films and that this genre falls into two categories: the “humans kick zombie ass” category, and the “humans fight hard to barely survive, and then die horrible deaths anyway” category. “Planet Terror” easily qualifies as the goriest and most awesome “humans kick zombie ass” movie I’ve seen in a very long time. Brief and totally spoiler-free review after the jump.

What’s It About?
A deal for some strange green gas goes wrong at an abandoned military base, and zombie mayhem ensues.
The Single BIGGEST THING Wrong with this Movie
It’s not on BluRay.
The Single BIGGEST THING “Right” with this Movie
Everything. The characters are awesome. The story, awesome. And Rose cGowan as a go-go dancer turned stand up comedian turned zombie slayer and savior of the world goes without saying.
Should You See It?
Yes, now.
Is There Stuff After the Credits?
Yes, there is a brief scene after the credits finish rolling.
Obviously I’m leaving alot out of this review. The “Machette” trailer, more about the characters, references to other films, and the absolute gore and badassness of the total Grindhouse effect of this film. My guess is that you’ll enjoy it more knowing about as much as I did going in. “Planet Terror” is freakin’ awesome, and is easily one of best zombie movies ever made.
Amazon