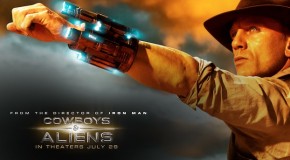 What’s It About? A mysterious and dangerous stranger with no memory and a wicked alien-tech arm blaster rolls into the mining town of Absolution – alien mayhem shortly follows. The Single BIGGEST THING Wrong

Like you, I wanted to see “The Grindhouse” when it was released in the theaters, but I couldn’t find a four hour block free to sit in the theater. While “Death Proof” looked good

King Kong (2005) Copyright © Universal Pictures People generally fall into three camps: those who like King Kong, those who think Godzilla is better, and those who think the first two groups need to

I loved the first Resident Evil film. It captured the “feel” of the Resident Evil universe from the games and added new elements, new characters, a grinding soundtrack and some really great “heroine kicks

“The Chronicles of Riddick” is the sequel to the 1999 sleeper “Pitch Black,” which was a smart and suspenseful sci-fi/horror film set on a single planet with three suns that eclipse once every 21

Ed Steele May 8, 2004 Comments Off on Movie Review: Van Helsing

I always use Rotten Tomatoes as my litmus for films – an average of all the reviews out there boiled down to a percentage is a really great way to rate anything, except in

Dawn of the Dead: Review