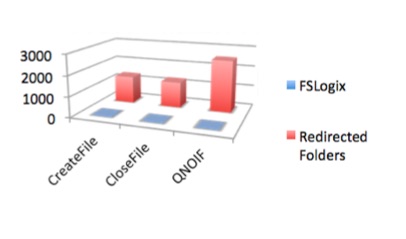 Over the last year I’ve posted several articles about FSLogix Apps, a pretty cool product that uses a new virtualization method to fix things like multiple java versions (java redirection), allowing multiple versions of the same app to be in the base image without having to do AppV sequencing, and even redirecting user data.  Sequencing and isolating browser instances (Java sequencing) seems like “so totally yesterday” when you can put all your Java versions in the same base image and have the right version automatically used at the right time for the right app.  Good stuff.

FSLogix has recently published a FAQ on making Outlook perform in virtual desktops just like on PCs and laptops.  This is not a big deal in named, or ‘persistent’ VDI, where each user has their own permanent virtual desktop, but has been an almost impossible problem to solve in non-persistent environments.

Why is this important?  Moving a desktop to a persistent virtual desktop takes all the problems you already have with our archaic desktop model and moves them to the cloud.  Why would you do that?  Non-persistent models force a redesign in the way OS’s, apps and data are managed and delivered, create new opportunities for the workspace to evolve, and finally drive down the cost to manage a desktop to where it should have been about 10 years ago.

Consider this:  with all of the advances in IT technology over the last 20 years, why does it still take the typical enterprise several years to roll out the latest OS from Microsoft or do something as simple as upgrade to a new version of MS Office?  If we really believe that a new OS is more secure, or some new app can deliver better end-user productivity, don’t we want it for our business immediately?

“The workspace is where productivity happens and business value is created – it’s the most essential, fundamental piece of the computing architecture, and it’s not ok that only 3-5% of workspaces are moving to virtual, dynamically created, cloud based systems – they should all be moving. – Brad Rowland, FSLogix”

Changing the underlying management model is key to making business more agile, adaptive, resilient and competitive through their IT systems.  Yes, we want these technology advances, and yes, we want them now.

A perfect example of this challenge is wanting to use RDSH based virtual desktops with hosted Exchange via Office 365.  These are not new ideas, so why is this a problem?  Hosted Exchange has been a “thing” for several years, and Citrix has been providing RDSH (originally ICA) based virtual desktops since at least the late 90’s.  The problem is created because a non-persistent desktop is (by definition) not permanent.  Every time a user logs in to the system, a new desktop is dynamically created which looks exactly like the users’ customized desktop – but certain systems require permanent locally caching to operate ‘normally’, and one of them is email.

Email is probably the original productivity app yet it continues to be plagued by operational problems as new technology models emerge, like mobile, virtual, and cloud.

In their 2.0 release, FSLogix added a feature called “Profile Containers” which claims to actually fix the problem.  Although “containers” is a bit of a marketing stretch, the term makes some sense, since the complete user profile is moved to a VHD.  Their virtualization filter convinces Windows that the user profile is local to the OS.  This eliminates legacy workarounds like folder redirection that add layers of infrastructure onto a simple request to get something as basic as a registry entry for an application.

This is a really cool feature for virtual desktops.  Aside from getting rid of all the traffic and file server overhead caused by Folder Redirection you can now put large files back into the user profile where they should be.  This means you can re-enable Cached Exchange Mode in RDSH and users can once again have a functional .OST.

“Bad mail client performance is one of several serious problems that has prevented enterprises from fully adopting non-persistent virtual desktop models.  Performance issues in email include long lag times and hanging while downloading and opening emails, time-outs when opening calendar items, and extremely slow response while inbox searching.  For administrators, the various workarounds to this problem can result in dramatically increased server utilization, increased cost, and ongoing poor and inconsistent performance for end users.”

Not just Office 365, but hosted Exchange, and even on premise Exchange can all work normally in non-persistent (or pooled) virtual desktops, RDSH based systems, and XenApp.

For more information on FSLogix, visit their website here and download an eval copy.  It takes about 10 minutes to install and probably less than an hour to start solving problems like this one.

Reference:  What is Cached Exchange Mode?

“Cached Exchange Mode was introduced in Outlook 2003 to give users a seamless online and offline Outlook experience. It also insulates users from network latency and connectivity issues while they are using Outlook. By caching the user’s mailbox and the OAB locally with Cached Exchange Mode, Outlook no longer depends on continuous network connectivity for access to user information. While connected, Outlook continuously updates users’ mailboxes so that the mailboxes are kept up-to-date. If a user disconnects from the network—for example, by removing a portable computer, such as a laptop, from a docking station—the latest Outlook information is automatically available offline.  Online Mode works by using information directly from the server, and, as the name implies, it requires a connection. Mailbox data is only cached in memory and never written to disk.” – Microsoft

Best practices for using Office 365 on a slow network

Cloud-hosted Exchange with RDSH/VDI Outlook is a performance nightmare. Are there any solutions? (Brian Madden)