Ed Steele July 6, 2011 Comments Off on The BubbleScope – 360 Degree Photo and Video Accessory Attachment for the iPhone 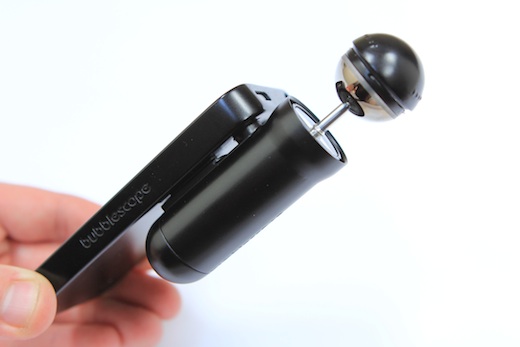 British inventor Tom Lawton claims he’s spent the last decade pursuing the perfect, instant panorama photography device. That’s funny, Tom, because we’ve been lusting for such a device for almost the same amount of time! The BubbleScope attaches to smartphones like the iPhone and uses the BubblePix app to capture a seamless panorama that can then be shared to social network sites like Facebook, Twitter, and YouTube.

Tom is very enthusiastic about his invention and rightfully so. We here at GadgetMadness wish you the best of luck in reaching your funding goal to see this cool imaging device to market!
BubbleScope – instant 360˚ stills and video on your smartphone