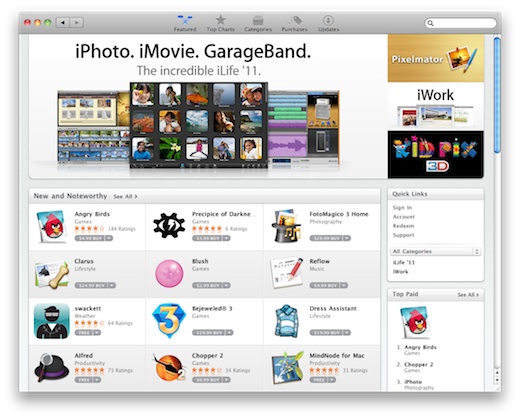 Apple’s App Store launched today! If you haven’t done so yet go to your Apple Menu and check your Software Updates to upgrade to 10.6.6 and after reboot the App Store icon will appear next to your Finder icon in the tray. So how is the App Store? At first glance totally fantastic – have you been putting off upgrading to the newest version of iLife ’11? I had too until about five minutes ago when I downloaded iPhoto ’11 and iMovie ’11 indivdually for $14.99 each. That’s right, instead of buying the boxed version for $49 you can download individual components for $14.99 and since I personally never use GarageBand I just saved some money – even if you do download all three, you still save $5 and no trees are killed in the making of your software. While we’re sure there may be minor glitches and snags along the way right now we’re extremely pleased.
The Apple Mac App Store is Now Open