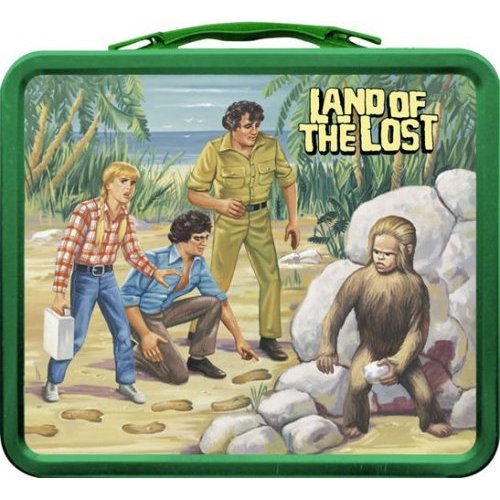 Have you seen commercials for the new Will Ferrell remake of “Land of the Lost” due to hit theaters any day now? We have, and we’re left scratching our heads like a Pakuni with fleas. The original “Land of the Lost” TV series was hardcore mind-bending science fiction disguised as a Saturday morning dinosaur show for kids. In addition to dinosaurs LOTL had a primitive Pakuni language developed by a linguist and stories featuring time travel, paradoxes caused by time travel, wormholes, parallel universes, alien species, and technology so advanced it worked like magic. Science fiction master Larry Niven regularly wrote episodes for the show and sparked imaginations worldwide – a show with stories and ideas truly ahead of its time.
So why is a science fiction classic like “Land of the Lost” being remade as a Will Ferrell comedy? We honestly have no idea – the character of Rick Marshall was an uberdad with common sense and a plan, and not the bumbling goofball he’s being portrayed in the commercials for the new film. We will reserve final judgment until the film is released. In the meantime we recommend checking out the regular “Land of the Lost” marathons shown on the SciFi channel or by way of DVD or digital download (where “Grumpy” the T-Rex suffers from inferior special effects but doesn’t understand English or respond to insults thrown his way.)
Update: Currently at 21% on Rotten Tomatoes and described as “haphazard”, “lame”, “uninspired”, “dull”, “unfunny”, and “inconsistent.” Whoops. Thanks, but we’ll stick with the TV version.
Land of the Lost: Complete Series (Limited Edition Gift Set) | Amazon

If you enjoyed this post, please consider leaving a comment or subscribing to the RSS feed to have future articles delivered to your feed reader.
Tweet
Share on Tumblr
POSTED IN » Gadget Gift Ideas, Movies | TV