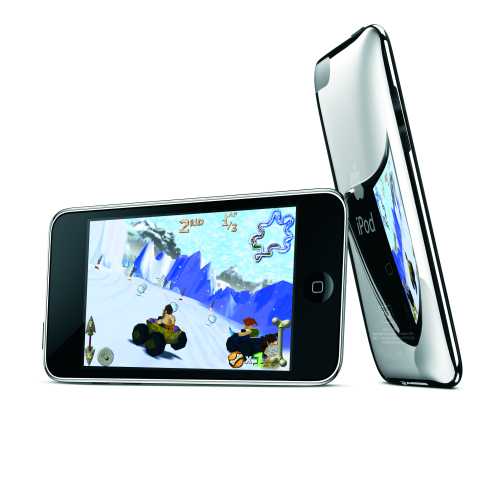 touchArcade reports that the new 2nd Generation Apple iPod Touch has the fastest 3D rendering performance of all devices in its class, making it even faster than the new iPhone 3G in this regard:

The most clear difference is that fact that the iPod Touch’s processor was quietly boosted to 532MHz (up from 412MHz) with the 2nd generation model introduced in September. Meanwhile, the iPhone 3G, Original iPhone and 1st Generation iPod Touch continue to run at the original 412MHz. Though not the intended purpose, this video from Handheld Games Corp shows that the app load time of the 2nd Generation iPod Touch is notably faster than the 1st Generation model.
It seems that there are additional factors, however, as there are performance differences even found between the models that run at the same speed. The models rank in the following order (fastest to slowest) for 3D rendering, with the 2nd Generation iPod Touch being the fastest by far.

We love Apple’s discreet way of introducing products that offer enhanced functionality like gaming without shouting “Hey look now it does this too!” from the rooftops. The new Touch is easily our favorite gadget of the year so far – with the ability to check email, browse the web, play games, view photos, listen to music and watch videos AND run cool apps we’re as happy as we can be!
(Image Courtesy of Apple)
2nd Generation iPod Touch Faster than iPhone