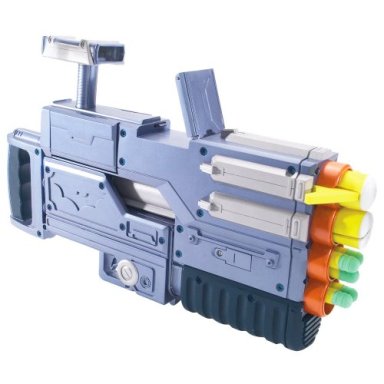 We think that the sequel to “Batman Begins,” “The Dark Knight” is going to be one of the best films of summer 2008. “Batman Begins” threw out all the kitcshy films from the 1990’s to start fresh from the beginning, and takes the original story of Batman as seriously as the graphic novels and comics do.
Knowing that you have a deep dark desire to be Batman, Mattel has released the “Dark Knight Grapnel Shooter” which they bill as the “ultimate assault gadget” and has eight rapid fire projectiles. Popping over your cubemate’s wall and saying “I’m Batman” in a deep growl is one thing, with this cool cubicle warefare weapon in hand is another altogether.
Amazon