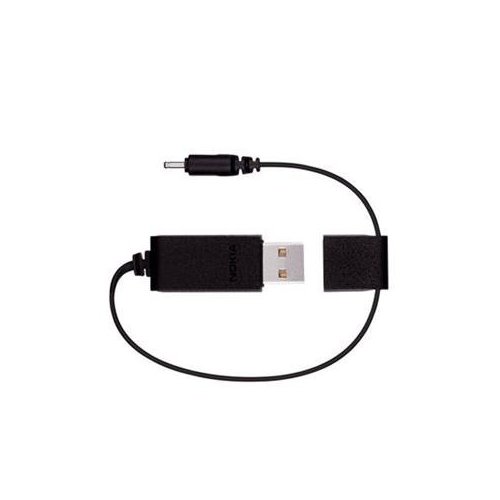 If you’re like me, you spend a great deal of your day sitting in front of the computer. (You’re probably reading this site from one right now!) And if you’re anything like me you probably plug in your dying cell phone at night to charge up, and then grab it off the counter in the morning right before you head out the door. Heaven forbid you forget to charge it, otherwise you’ll spend the majority of your day with one nervous eye on the battery meter, shutting down Bluetooth and hoping that one last battery bar will hold out until the end of the day.
Wouldn’t it make sense to instead keep your battery-hungry phone charged throughout the day while you use it? And that computer you’re sitting in front of has a USB port, doesn’t it? The Nokia CA-100 USB charger works on just about all Nokia phones with the new 2mm power plug that don’t already charge via the USB port. (Funny that none of the retail cell phone accessory stores I checked sell this essential USB power gadget, but they sure have plenty wall and car chargers.)
Amazon