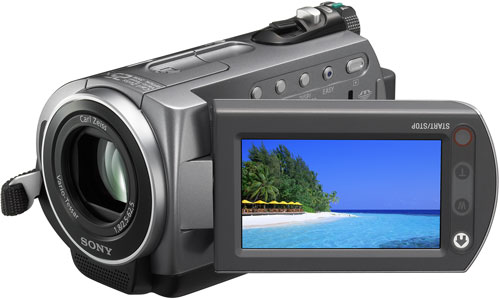 There’s a funny trend going on with camcorders where key features are stripped to encourage you to buy the more expensive models. I’ll get straight to the point – I wanted a hard drive camcorder that had manual and auto light exposure modes, and most importantly a line-in audio microphone input jack that comes in around $500. Sounds easy right? Not! With camcorder video quality on lower end models getting better and better, some manufacturers have started to gimp the audio features on their base and mid-range models to encourage you to buy their higher end video cameras. Just go out on Amazon and try to find a less than $800-$1000 hard drive camcorder with a line-in audio jack – it’s almost impossible.
I did say almost – here’s how you do it. The Sony HandyCam SR62 has a 30GB disk for storing video and connects to your PC via USB port. It does not have a direct external mic jack but instead uses a proprietary Sony “Active Interface Shoe” to allow for you guessed it – proprietary Sony microphones and light accessories. So how do you hack or modify the AIS port to attach a standard lapel or wireless mic? 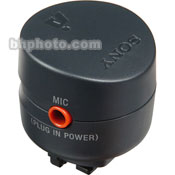 Easy. Order a Sony VMC-K100 external mic adapter which transforms the proprietary AIS connector to a standard external mic port.
Here’s how the math works out:

I spent several hours looking for the most cost-efficient tapeless camcorder setup with the best range of features and an external microphone input jack, and this was it.
UPDATE: All of our gear arrived a few days ago, and when we hooked it all up to my initial horror sound was not being picked up on the microphone. After reading through settings and checking connections we finally decided to read the instructions for the microphone. Duh – we didn’t realize the mic requires a single AA battery, which after we installed everything sounds great!