Microsoft Zune VS iPod, Or Why I Love Zune Marketplace 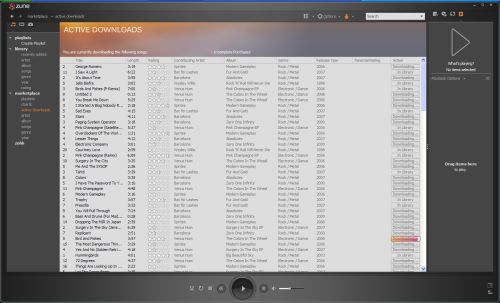 I’m the first one to admit that this article is a bit out of place among recent release of the iPod Touch and iPhone. To set the record straight: I own an original iPod Nano and a 30GB iPod Video, and have purchased quite an extensive library of music and shows from iTunes. So I’m writing this from the perspective of a long time iPod owner and person who really likes iTunes. All that being said, I absolutely love the Zune Marketplace, and here’s why.

Microsoft is really on to something with their all-you-can-eat subscription model. I recently picked up a Halo 3 Zune for the sole reason that it was Halo 3 branded. (Smart move there, Microsoft.) Last night I broke down and setup my Zune Marketplace account for $14.95 a month.
There’s a certain freedom associated with being able to download anything at all and as much as you want. My taste in music is fairly eclectic. My favorite bands are Cansei De Ser Sexy, Barcelona, Sprites, Venus Hum, Figurine, Bat for Lashes, and Peaches. I’ve been downloading albums all morning, stuff I’ve really wanted to buy on iTunes but couldn’t justify spending .99 cents a song or $10 per album for. The screenshot above is of all the music I’m currently snagging, and the list extends far past the bottom of what you can see in the screencap. Had I purchased all this music from iTunes, it would have easily cost me over $100. It’s literally like being a kid in a candy store. I just searched for Sprites, picked all three albums, and they’re downloading right now.
Maybe I’m the exception, but I like to listen to all kinds of music and rotate my library often. I also believe in paying for my music and not downloading it for free. To rotate my library on iTunes was getting expensive, but now with my Zune and Zune Marketplace if I hear a song somewhere I just can search for the album and download it without thinking about the cost. The “feeling of freedom” factor aside, there’s no way I could ever financially afford this on iTunes.
So am I saying the Zune is better than the iPod? Apple has set the bar with the iPod Touch and its revolutionary interface; the other players in the field have some serious catching up to do. However Microsoft has a serious edge in my opinion with the Zune Marketplace and its subscription-based model. Now if you’ll excuse me, I’m going to go back to stuffing my face.
Disclaimer: As with everything we write here on GadgetMadness this is our own honest opinion. We don’t accept compensation for reviews or posts from anyone, ever.