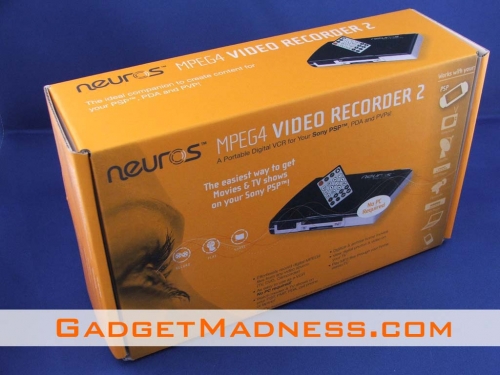 Those of you who have been reading this blog for awhile know that I have an affinity for video gadgets. Many years ago I found a nifty way to broadcast the video output from a GB camera to the Internet, and more recently I reviewed a camera that can also record video from any video source. Neuros Technology was kind enough to send me a review unit of their Neuros Video Recorder 2 and I’ve been using my Neuros for several months now. I’ve never seen a gadget “leapfrog” the competition the way the Neuros Recorder 2 does – it’s awesome! 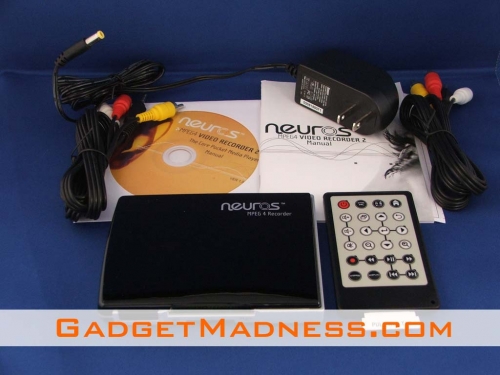 The Neuros Recorder will record video from any video source in MPEG4 and 3GP format. Now just think about that for just a second. Let’s say Sci-Fi is running a mega-marathon of the Twlight Zone and you want to record every episode to watch on your PSP or iPod. (Also included on the Neuros CD is a video player for Palm and Pocket PC.) Maybe you have a stack of old VHS tapes and you want to transfer them all to MPEG4 format, near-DVD quality in 640×480 resolution. The Neuros has a Compact Flash type II slot, as well as a Memory Stick Duo slot for PSP and records in 640×480, 320×240, 368×208 (PSP), and 176×120 resolutions. I use a 6GB microdrive for heavy duty recording, and a 1GB duo card for my PSP content. Hooking the Neuros up is a snap. Connect the AV cables to your input and output devices, plug in the AC adapter, and insert your memory cards. I could yammer on about how easy it is to record video without a PC, but this demonstration video will show you just how easy it is to transfer content from the Neuros to your PSP:

Hands On With the Neuros MPEG4 Video Recorder 2

The inclusion of an internal hard drive (or the ability to add your own) would make the Neuros Recorder the ultimate video recording device. I don’t think most people aren’t going to shell out the cash for a 6GB microdrive, but let me say if you do it makes all the difference in the world. I’d also like an “instant record” button right on the Neuros box itself so I could start recording with a single press of the button. One funny note about the packaging – have a look at how tiny the remote is compared to the recorder itself in the box art, then have a look at the actual size of the remote in the “What’s In The Box” photo. (Objects on box may be larger than they appear!)

GadgetMadness Verdict: There’s No Easier Way to Record & Transfer Video to Your Portable Media Device. You Need a Neuros!

The Neuros Recorder is reasonably priced, full of features, upgradable via firmware updates, and records better than any other device out there today. It’s also super simple to use, and highly recommended.