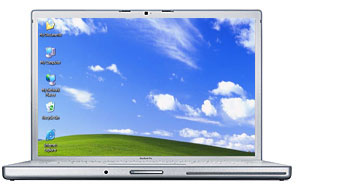 This is huge – new Mac owners can now throw those copies of Virtual PC in the garbage. Apple has released “Boot Camp” which allows new Intel-based Mac owners to run Windows XP on their systems. Apple isn’t being humble about this either:

Apple has no desire or plan to sell or support Windows, but many customers have expressed their interest to run Windows on Apple’s superior hardware now that we use Intel processors, said Philip Schiller, Apple’s senior vice president of Worldwide Product Marketing. We think Boot Camp makes the Mac even more appealing to Windows users considering making the switch.