Gadgets Bad For Your Health? ……..Say it ain’t so 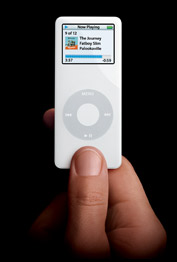 Many studies are now showing the negative affects of the constant use of gadgetry. Recently Virgin mobile announced that in excess of 3.8 million britons suffer from RSI (Repetitive Stress Injury). This is said to be a direct product of the use of small electronic gadgets such as the blackberry and iPod. The use of devices such as cellphones for texting are the most common culprit.

“BCA chiropractors recognise that text messaging regularly, over a long period of time, could cause repetitive strain which may cause both short and long term injuries,”

The same organization (BCA) has also found the appropriately named “iPod Finger” to be a common inducer of RSI. The constant and repetitive motion of using the scroll wheel is apparently not good for you. And what would I have to say to all this as a man of many gadgetry of all being the almighty iPod. I say…nay…as much as my common sense and logical reasoning says that I should take this as a warning I am going to persist on being an ignorant fool and take my gadgets and go hide in a corner. I’m going to rely on the ever progressing field of medicine to take care of this. Or maybe I’ll do some of the excersises listed in the following link.

The Register on RSI
iPod Finger