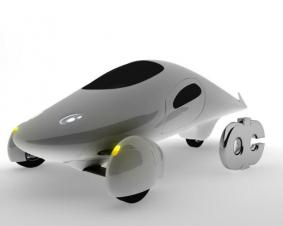 Accelerated Composites, a recent start up, plans on building a cheap new radically designed 2 person car with an astounding fuel efficiency of 330 mpg. The aerodynamic design combined with a light weight composite body will be what brings this Diesel/Electric car 330 miles on one gallon. However if that should prove possible many look on and wonder…is that safe? Is it slow as a snail? Well Accelerated Composites claims to be designing it with driver safety in mind. It is based on the “Crash Box” found in Formula One cars and as for performance; It’ll be similiar to that of a Honda Insight. This isn’t the first time we’ve seen these new radically designed cars but Accelerated Composites is serious and plan on building and releasing these cars. We’ll just have to wait and see whether this really comes about.
Start-up plans 330 MPG hybrid for under US$20,000