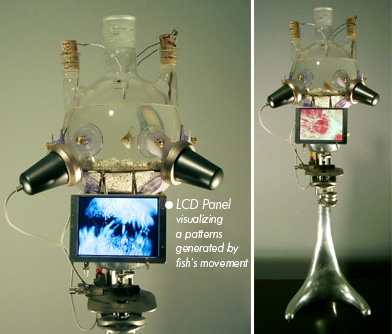 A device that explores the many aspects of biosonic and infrasonic sound. Video capture from outside the tank is combined with the data from flow sensors inside the tank (measuring currents caused by the fish’s swimming patterns). These inputs are combined to create audio and video output. Bae (the designer) suggests that, “even if the fish can’t speak and express its feelings in a human way, it has an energy and communication skill in its own way. Vibration is the medium of interaction, and I chose it for its universality in the physical, emotional, and spiritual realms.”

We’d love a fishtank that looks like a B’omarr Monk. Wouldn’t you?
Fish Tank by Sangmin Bae :: YankoDesign.com