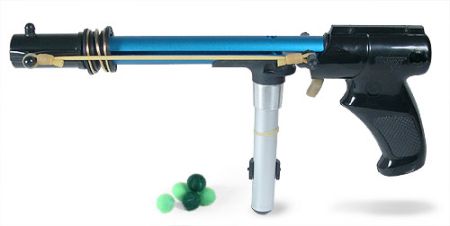 What do we love? Pain! We like gadgets that inflict harm without leaving evidence, as you may remember from our Shot Blade Launcher review. Tagball shoots small 3/4″ diameter Hook & Loop (Velcro) ammo which leave no mess, or physical evidence of pain. Toy guns with warnings are our favorite:
“Safety goggles should be used at all times due to the high velocity with which the ammo is fired.”
Must have!
Tagball Velcro Gun at ThinkGeek.com