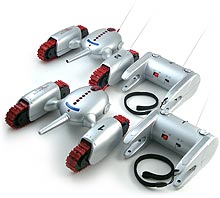 Remember the play army tanks you used to play with as a kid? Then came remote control tanks – that was something! Now, imagine this: two remote controlled battle tanks with infra red guns, two control units with built in shocking function (with two shock levels: pain, and more pain) and speakers. A direct hit on the tank shocks the driver, five “shocks” and you’re out. Does the idea of Laser Tag Tanks that emit pain sound like fun to you? (We say “yes!“)
Shocking Laser Tag R.C. Tanks at ThinkGeek.com