Ed Steele February 19, 2005 Comments Off on British Parliament Under Attack? 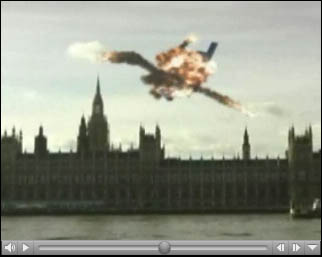 This site has some very shocking footage of what appears to the British Army destroying a stealth fighter that was trying to attack the Parliament building (though, strangely, the building has nothing to do with either the cigarettes or Funkadelic). Could this amazing homemade footage be real?

Not surprisingly, it’s another attempt at viral marketing in the video game world, this time for Atari’s Act Of War: Direct Action. It’s not as sexy as the “Head-Squid”, but at least this one has the decency to tell you at the end of the 35 second video instead of making you do some hard work like remove the path from the URL to see that the domain name redirects to UBISoft.
Instead of these half-hearted attempts at viral marketing, I don’t get why more people don’t look to the example of the ultimate in this field: AI. Spielberg and Microsoft completely reeled a bunch of us in for literally months before we knew where the trail was leading us. Sure, the movie sucked, but for a lot of us, the puzzle was the whole point.
Original link via B3ta