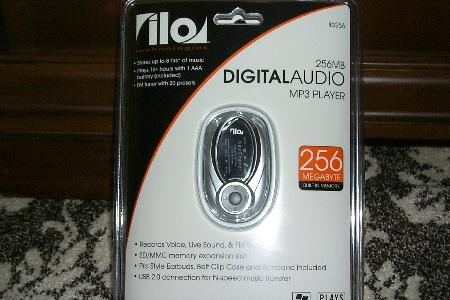 When Gizmodo speaks, people listen. By “people”, we mean gadget-obsessed monkeys hyped up on Red Bull and Shock-A-Lots espresso bean candy like us. And by “listen”, we mean act impulsively and spend money on gadgets. So when the editor of the Mighty “G”, Joel Johnson, posted about the new iLo MP3 audio player from Wal-mart and made the request for “Someone get out to Wal-Mart and test one out for us, okay?” my twitchy little ears perked up and I immediately and with wild and reckless abandon drove to the closest Walmart (unlike Joel I can sideswipe about twenty stores if I swerve to the right on any major street and floor it) and found there were only two iLo MP3 players left. Is this MP3/FM radio/recorder worth $79.72 of your hard earned cash? 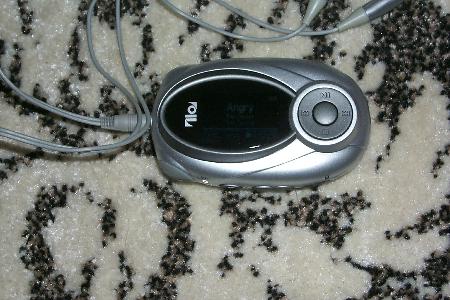 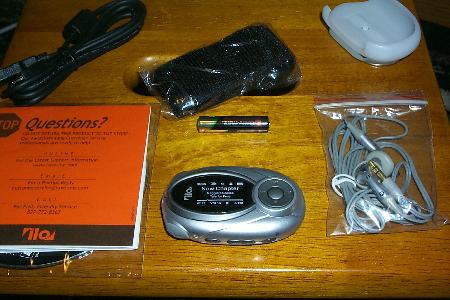 From the top moving clockwise: a USB cable for data transfer, a soft fabric armband, a protective plastic holster to hold the player, so-so quality earbuds, the iLo MP3 Player, instruction booklet and software CD, and a AAA battery.

What’s Good about it? 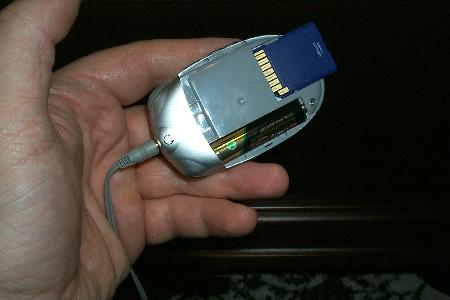 For starters, the sleek design, nice tactile feedback on the control buttons, and a well-lit screen. I wanted to see if this “playa” would work on my Powerbook, so I skipped my usual “read the instructions carefully” bit and inserted the battery, a 512MB SD card, and connected the USB cable to my PowerBook. 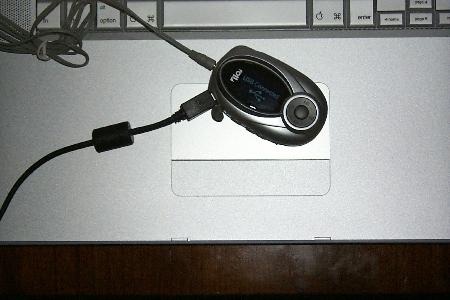 USB connected to PowerBook, What Do We See? 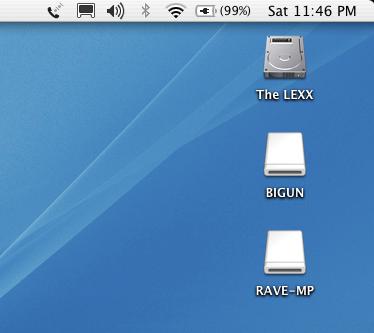 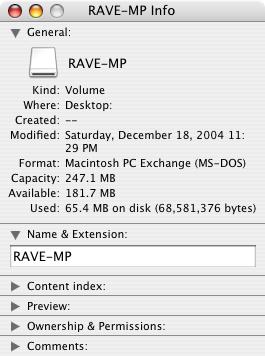 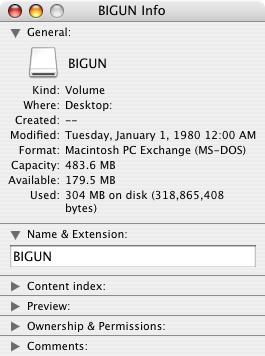 Sweet, without any hassle whatsoever, two external drives appear. The RAVE-MP drive is the 256MB of internal memory, and the BIGUN drive is my 512MB SD card. There are 16 sample BONUS round tracks that come with the iLo (if you delete them from the internal memory do not fear, they also come on the included software CD and can be easily reloaded. I listened to two of them and then deleted the rest.) 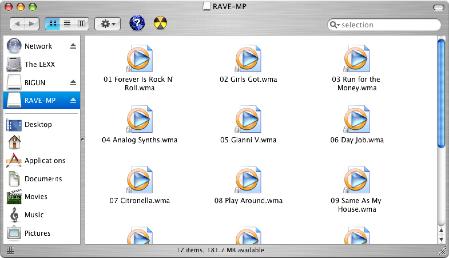 iLo Backlight with No Flash but Very Shaky Hand 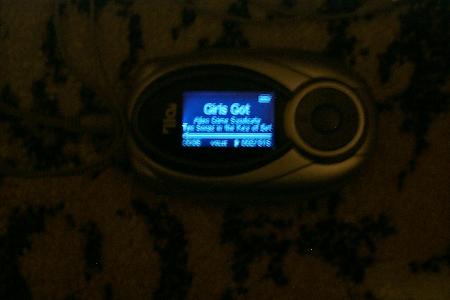 My Windows install was also seamless and without instance or reboot. I connected the player via USB and Windows XP Pro (SP1) detected the hardware without asking for a driver CD. Both internal and external memory showed up as drives, and I could select either in Windows Media Player to copy songs to.
On my PowerBook I ran into a weird problem with my MP3’s encoded with iTunes where the ID3 information (artist, album, genre, etc) did not show up on the display, only the filename of the MP3. All my WMA and MP3 files encoded with WinAmp and Windows Media Player showed up fine, so in iTunes I selected my songs and then selected Advanced – Convert ID3 Tags from the file menu. I chose v2.4 for my tag version and copied my songs back to the player, and after that the ID3 information for my songs showed up fine.
The specs on the Wal-mart website claim that the iLo cannot be used for “data storage” however there is nothing stopping you from using the internal 256MB to store document, pictures, or other types of files – the data remained on the internal memory even after I removed the battery and replaced it about an hour later. Same thing goes for your external card.
The sound this unit puts out (once you replace the included earbuds with a good set of headphones) is clear and crisp, with decent bass and solid treble. I used a pair of Sony MDR-NC5 noise-cancelling headphones and I liked what I heard. I also liked the 6 equalizer presets: normal, 5-Band EQ, Rock, Jazz, Classical, and Pop. The audio adjusts as you select a preset, so you can hear in realtime how the preset you select will affect the audio. Also nice is the ability to select the music you want to play by Album, Artist, Genre, or Track.
The FM radio feature of this unit is ok, but not stellar. There was mild static on stations that on other radios would be crystal clear. The ability to either manually step through the FM spectrum or hold down the right or left select and scan stations is nice, and recording FM is a snap – just hit the play button to start, and the stop button to stop. Storing presets was easy, but it was after I started storing presets that some glitches with the FM radio started to appear, which gave me serious flashbacks to using the FM radio on my first N-Gage.

What could be improved?

The iLo MP3 Audio player has just a few limitations that may turn some of you off. The voice recording feature recorded something that sounded like my voice, but I had to listen twice to be sure the muffled and hardly audible noises it captured was me. Using the voice recorder on the iLo is kinda like taking pictures with a Game Boy Camera – you didn’t really expect it to take good pictures, did you? You can only record voice or FM radio to the internal 256MB of memory. While I was in FM record mode the display accurately told me I had almosty nine hours left for record time, so unless you plan to make heavy use of the FM record feature this limitation may not be an issue for you. The unit did lock up on me twice while I was listening in FM mode, and after awhile started powering off when I would record in FM after I hit the stop button. I connected to the device and deleted all the “settings.dat” files on the internal memory and this cleared up my problems (but also deleted all my FM presets.) Also, there are no file management features on the player, so to manage your recordings and music you have to connect the player to your computer. Another limitation for some will be space – the largest memory card the iLo can handle is 512MB – it will not work with a 1GB card and this limitation is documented on the RaveMP support site. It is always possible that these limitations/problems may be cleared up in future firmware releases, but for now you gotta like it or lump it.
For those of you expecting an iPod for $80 bucks, this ain’t it. For those of you expecting a solid little MP3 player with good sound, easy to navigate menus, some advanced features and some minor FM quirks, then this is the MP3 player for you. You need to get on Santa’s lap NOW and ask him to bring you one. (And by “Santa’s lap” you know we mean Joel Johnson’s.)