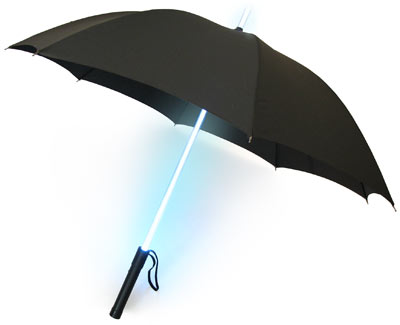 In the year 2018 cars will fly, androids called replicants will be more human than human, and umbrellas will light up with an eerie florescent glow. That’s what we learned from the 1982 classic science fiction film Blade Runner starring Harrison Ford and Sean Young, and it strikes us funny (funny meaning stupid) that noone actually made umbrellas that light up sooner, considering they had the idea handed to them for free twenty two years ago. Still no word yet on when robots will be made to look as good as Sean Young.
Blade Runner LED Umbrella