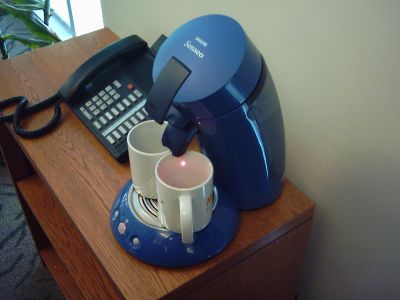 In today’s edition of “Using gadgets to determine relatively useless information,” we review the new Philips Senseo Coffee system, the coffee it makes, AND measure the temperature of the coffee with a laser temperature sensor!

The Philips Senseo (we picked Senseo blue – black and white are the other colors available), a single pod holder and a double pod holder, sample light roast coffee pods, the water reservoir, and the instructions.

Lots. We took our Senseo out of the box, and ran it though its initial cleaning process per the instructions, which only took about 20 seconds. (Don’t worry about the awful noises it makes during the initial clean cycle, it is far noisier during the one-time cleaning process than it is when it makes coffee.) We then placed two dark roast pods in the dual pod holder, and pushed the two-cup button. Click on any of the images for a larger picture: 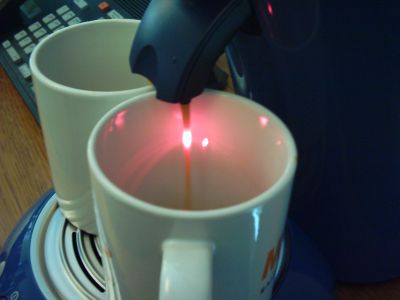 The red light is from the laser temperature sensor as we measure the temperature of the coffee as it enters the cup. Just how hot is it, you may ask? 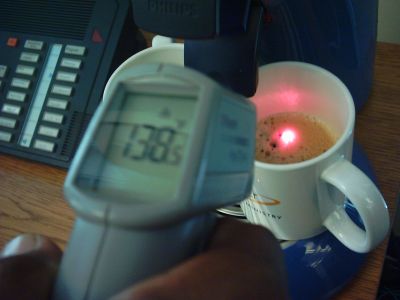 A special thanks to Mr. L. Atreides, the superintendent of GadgetMadness Headquarters, for using his laser temperature gun to measure the temperature of our coffee. (FYI – my forehead measured 83 degrees!) 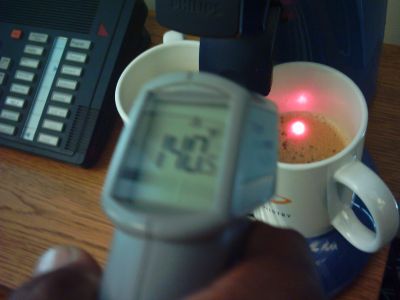 Yep, that’s about how hot you want your coffee to be. It’s reaaaaaalllly hot, ok, so for Pete’s sake don’t do anything stupid like put it in your lap and drive somewhere. (That would just be dumb.)
Needless to say the coffee this thing makes is consistently strong, frothy, smooth, and freakin’ delicious. I say this from the vantage point of having consumed every form of caffeine I’ve ever been able to get my hands on, everything from chewing handfuls of raw beans to Starbucks, from Seattle’s Best to Cafe du Monde, toss in some French Market, Cafe Molido, and Medaglia D’oro – you name it. I don’t generally care much for brewed coffee, but the drip from the Senseo is probably the best I have tasted from a standard drip coffee maker. The coffee isn’t the best part about the Senseo though – the cleanup is! 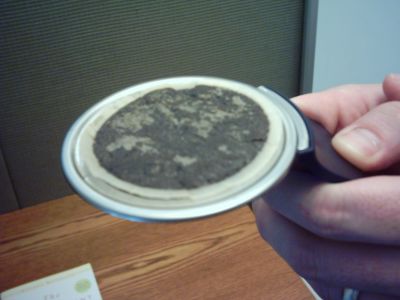 Two pods resting neatly in the two-pod holder, just the way we like it. 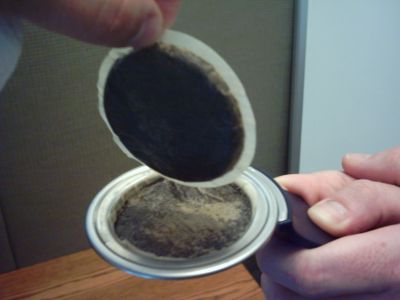 What’s this? Pick up the pods, wipe the pod holder with a paper towel, and cleanup is finished!?! Delicious, delicious! Let’s brew two more cups and dance the dance of the meercat!

At close to $70 bucks (we bought our own) the Senseo may be expensive for some people. The coffee works out to twenty-two cents per cup, which isn’t bad for the final product the Senseo makes. I really wanted the white cups shown on the outside package, sadly the Senseo comes with no cups. That’s right, no cups! The humanity! I’m obviously stretching here – the only real bad thing that comes to mind is that I will be drinking fewer Red Bull and Monster Energy drinks, and making fewer stops to Starbucks now that I have a Senseo at my desk. Another drawback for some will be that you have to use the Douwe Egberts coffee pods exclusively. We found the coffee the pods produce to be of superior flavor, with no bitterness whatsoever, so we’re not complaining about being stuck with them.
We like the Senseo, and you probably will too. It’s a very nicely designed product that’s pretty to look at, and it makes a succulent cup of coffee too.

Update: I totally need to give a special thanks to GadgetMadness contributor Doc for his help during this review: reading the directions, coercing Mr. Atreides to use his laser temp gun, tasting the coffee, and holding the dirty pods in the picture. Thanks Doc!