Ed Steele May 8, 2004 Comments Off on Movie Review: Van Helsing 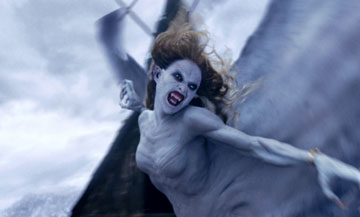 I always use Rotten Tomatoes as my litmus for films – an average of all the reviews out there boiled down to a percentage is a really great way to rate anything, except in this case. If you listen to most of the critics’ reviews of “Van Helsing,” you’ll miss the first great movie of summer 2004.

Van Helsing is about a mysterious monster hunter, named Van Helsing (duh) who kicks the ass of evil for the Vatican, even though he doesn’t remember anything about who he was before he showed up beaten to a bloody pulp at the Vatican’s door. There’s a new kind of evil brewing in Transylvania, where Van Helsing is sent to investigate just what Count Dracula wants with a certain family who has vowed to kill his undead vampire ass, but just can’t seem to get the job done.

The trailers. That’s right. I watched the trailer for Van Helsing several months ago and HATED the way the werewolf looked. Hated the way Frankenstein looked. (The first Van Helsing trailer spawned a huge discussion between whodack and I about how werewolves should look like the vicious beasts from the 80’s film “The Howling,” but I digress.) In the first trailer, the werewolf looked like a stupid, fuzzy, big dog with a short snout, and Frankenstein looked like a bald Richard Simmons plus 150 pounds. The Brides of Dracula looked alright, but not very impressive. I was disappointed, because I thought if the filmmakers don’t know what modern versions of these classic movie monsters should look like, then that would mean they certainly wouldn’t get what the film should be about. So why did the monsters look WAY TRIP in the film I saw? Because the trailer was made BEFORE all the CG work on the creatures was completed and polished. In the movie I saw yesterday, the monsters were ALL OVER what current visions of these classic monsters should look like, while at the same time retaining their classic elements. The werewolves’ transformations from wolf form to human form and back again are horrific, with huge chunks of flesh being ripped off and torn away. Frankensten’s brain cavity and heart have a clear dome where you can see bolts of plasma and electricity shooting about like Tesla-coil blood and brain matter. The Brides of Dracula look INCREDIBLE in the film (although one of them dresses a bit like the red-haired Fanta soda girl when she’s in human form, I kept expecting her to start singing “WAN-NA FAN-TA, Don’tcha WAN-NA!?”)
If you remember The HULK superbowl commercial, you’ll recall it too suffered from unfinished CG work. Everyone thought the HULK looked like crap. If you saw the HULK in the finished movie, you’ll know he looked pretty darn realistic, far better than he did in the superbowl spot. My plea to movie studios: stop putting unfinished CG in movie trailers. It turns us off on the movies you are trying to convince us to go see. Didn’t you learn in school that first impressions are the most important? (Idiots.)

This is hard for me, because there’s alot of “right” to choose from in this film. Fantastic looking monsters, an unexpected monster cameo fight scene, homage to vintage monster films. Amazing action sequences and fight scenes. The fact that vampires die in this film the way I’ve always thought they should die, and that the werewolf transformations are really disgusting. Attention to subtle details (watch for the copy of the Holy Bible in the windmill at the beginning, later in the film you’ll understand why.) But if I had to pick the one single BIGGEST thing right in Van Helsing, it would be Count Dracula. He’s over the top, menancing, and funny as hell. At one point someone says to Dracula: “I’d rather die than help you!” Dracula casually replies: “Don’t be boring. Everyone who says that dies.” Later, Dracula gets a silver stake in the heart, and begins to convulse and agonize in pain. (His attacker doesn’t know that he’s immune to just about everything thrown at him – he simply cannot be killed.) Dracula stops convulsing, smiles, and nonchalantly yanks the stake from his heart. He offers it to his attacker and says “This your silver stake?” Richard Roxburgh plays the role of a smug, immortal, invinicble badass vampire perfectly.

Make friends with Friar Carl, who makes all the fantastic weaponry Van Helsing uses. He’s the only source for good gadgets in the year 1872.
This movie was obviously a labor of love on the director’s part, and it shows. As a kid I loved getting hyped up on Kool Aid, which was really just sugar and water. As an adult, I love getting hyped up on Red Bull, which has a far better kick than Kool Aid ever did. Van Helsing is the “Red Bull” of the monster movies you loved as a kid: 150% more caffeine, 150% more adventure, and 150% more of everything. Does that sound like a movie you would like to see? If so, then go now and buy your ticket to Van Helsing. If not, then you obviously suck but we’ll still let you read our website. 🙂
Comments and feedback, as always, is welcome.