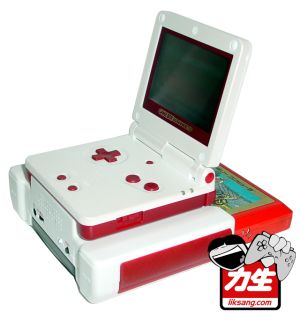 The GBA Time Machine is an add-on accessory for your Game Boy Advance SP that let’s you play old Famicom (known as the NES in the States) carts on your Game Boy SP. An inexpensive adaptor will allow you to use American NES games with this device as well. In light of how seriously Nintendo takes illegal ROMs of old games, and the consumer demand to play older games on newer hardware, we’re glad to see innovations like this one. It’s like mixing peanut butter and twenty-year-old chocolate. Well, maybe not.
GBA Time Machine at Lik Sang