Dawn of the Dead: Review 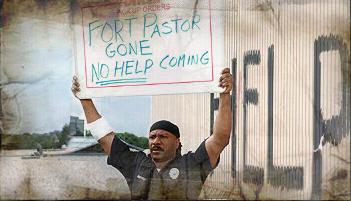 Zombie movies fall into two categories: the “humans kick zombie ass” category, and the “humans fight hard to barely survive, and then die horrible deaths anyway” category. Beware All Ye Who Enter, Here There Be Spoilers…

A remake of the 1978 George A. Romero classic. Zombies are everywhere, and those bitten become a zombie. A group of survivors make it to the local mall, and barricade themselves in while hordes of undead gather outside.

Noone has a freakin’ cellphone. Come on people, the movie is set in the present. And NOONE tries to call ANYONE on their cellphone when the world breaks down into chaos? STOOPID.

A guy named Andy. He owns the gunshop across from the mall, and he’s trapped on the roof (not trapped exactly, he can go inside the gunshop, but the roof is safer.) The survivors in the mall see him from the mall roof, too far to shout to but close enough to write messages on whiteboards to them with Magic Markers (they read the messages with binoculars.) He’s funny, and a great marksman. One of the funniest, yet sickest scenes in the film is where the mall roof sitters write the names of celebrities like “Rosie” or “Burt Reynolds,” and Andy picks the zombie who looks the most like the named celeb with his sniper rifle and blows them away. Sick, but hilarious. The only time you hear Andy speak is once over a two-way radio, and what he says breaks your heart. (That’s right, I said he owns a gun shop, but not a freakin’ cell phone – STOOPID.)

If you like zombie movies that fall into the “humans fight hard to barely survive, and then die horrible deaths anyway” category, then sure. I prefer the ones where humans kick ass myself. The effects were good; the characters were not fleshed out at all – established characters die without you ever knowing their names. Ranking this film against other recent films in the same genre, I’d say this one falls behind 28 Days Later and WAY behind Resident Evil, where Mila kicks much zombie butt.

I’ve often wondered why the living didn’t just play the waiting game and let all the zombies outside decompose. The human body will decompose in what, like 6 months or less? Wait until they all turn to mush, then go outside and pick your prime real estate.
This is the format for my first film review. It’s short, sweet, and to the point. Your comments are welcome.